This week’s show is basically just two big segments covering The Mandalorian chapter two and Jedi: Fallen Order. We start the show by discussing favorite moments from The Mandalorian as well as some potential symbolism in the episode and the cruelty of the post-Empire galaxy. The second half of the show features our early experiences playing Jedi: Fallen Order and a discussion of its influences and gameplay systems.

This week’s episode is all about Star Wars video games. We kick off the episode by disucssing the recently announced Jedi Knight and Jedi Academy console ports before devoting the rest of the show to taking a look at the recently released and completely excellent Star Wars Pinball package for Switch. We originally planned on discussing the many Rise of Skywalker toy leaks that have been happening lately, but there was just too much pinball to talk this week so we’re saving that discussion for episode 122.

In continued celebration of The Phantom Menace, this episode features a look back at Star Wars racing games. We spend the bulk of the episode on Episode 1: Racer in its various forms before spending some time with Racer Revenge, Super Bombad Racing, and Resistance Racer.

This week’s episode opens with updates on Lego Star Wars: The Skywalker Saga and Star Wars Celebration ticket sales as well our thoughts on Michelle Rejwan being named SVP of Live Action Development and Production at Lucasfilm. The second half of the show features a discussion of Marvel’s Age of Rebellion series and the upcoming Age of Resistance. 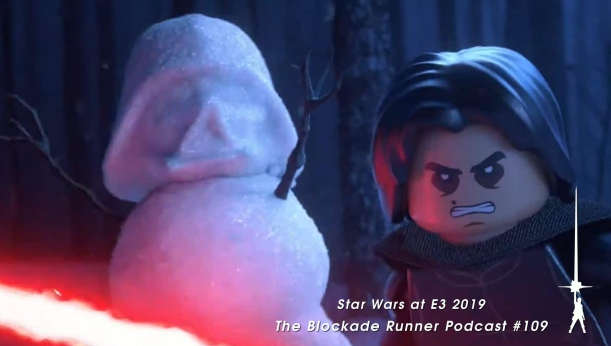 Author Alex Kane returns to the show to talk to Ryan about his Celebration 2019 coverage for StarWars.com, his top 10 Star Wars games article for Variety, the Jedi Fallen Order reveal, and some more KOTOR.

This week’s episode features an interview with Alex Kane, author of the upcoming book Star Wars: Knights of the Old Republic. Ryan talks to Alex about KOTOR, the book, and Alex’s other writing on games in the show’s first segment. John joins for the second half of the show to talk with Ryan about how much he enjoyed the book (even though he’s never played the game), the impact of KOTOR on Star Wars culture, and the potential influence of the game on rumored upcoming films or other media set in the Old Republic era.

Star Wars: Knights of the Old Republic releases on April 9th and you can pre-order your copy here.

We start this week’s show off with some chat about recent tweets signaling an end to Episode IX’s filming, a discussion of the just-announced Galaxy’s Edge books coming later this year, and a voicemail from The Rural Farmboy (@aRuralFarmboy). The rest of the show is devoted to an in-depth look at Electronic Arts’s exclusive deal for publishing Star Wars games. We run through the history of EA’s Star Wars releases (and cancellations) and lament the unreleased games and missed opportunities (seriously, no Nintendo Switch games?) that are part of the EA-era.

Ryan and John are joined by Jeff “The Metal Mando” Kelts to celebrate all things Shadows of the Empire. Join us for two hours of talk about the Shadows book, comic, game, toys, soundtrack, trading cards, and more!

Ryan and John are joined by Jeff (The Metal Mando) to discuss all of the Star Wars books, comics, games, and toys released in 1995. We focus the most time on the two monumental events that made a huge impact on Star Wars fans in 1995, the Power of the Force toy line and the THX home video releases. Other highlights include The Illustrated Star Wars Universe, The Star Wars Technical Journal, Dark Forces, and Rebel Assault II.

The Blockade Runner
Create a free website or blog at WordPress.com.