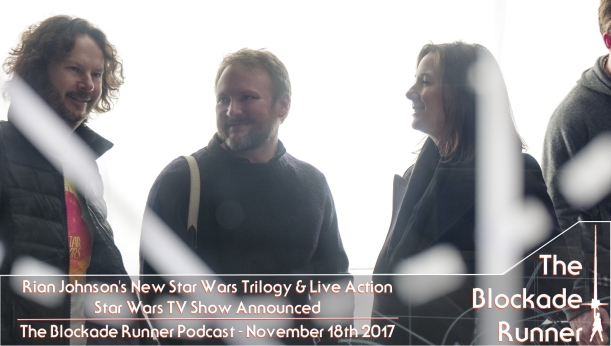 Ryan and John discuss Rian Johnson’s new Star Wars Trilogy, Lucasfilm’s live action Star Wars tv show, and our time so far with Battlefront 2! We consider what’s most likely for the trilogy and tv shows before jumping into what we’d actually like to see. Plus Ryan shares his impressions of the Battlefront 2 campaign and we share our take on the EA/Battlefront 2 micro transactions controversy.

Ryan and John chronicle the Rogue One reshoots saga before discussing The Star Wars Show, those insanely cool but super expensive Ultimate Studio Edition Collectibles, The Force Awakens soundtrack, and why John is happy for “Chewbacca Mom” and Ryan “feels nothing.”

Today I’m very excited to share the first episode of The Blockade Runner’s video show on YouTube! We shot the footage last month and I’ve been working on putting it together since. This episode features Dan, Kevin, and myself (John) discussing our initial reactions to Lucasfilm’s sale to Disney and the news that many more films were to be produced going forward, which seemed like an appropriate topic for our first episode and one that would potentially remain interesting even after The Force Awakens is released and the speculation about its plot is put to rest.

The Blockade Runner was actually originally conceived as a project that would primarily produce videos like this one, but financial, geographical, and scheduling difficulties meant it was easier to start with the podcast and blog and move forward with the video production side of things afterward. We plan to continue shooting episodes whenever we can though, and there’s more footage already recorded and in the process of being edited that will go up soon.

You’ll notice we’re not referring to this video as a podcast; we chose to avoid the formatting we use for our audio-only shows and hopefully this will feel different from what we release in that format. The videos will be considerably shorter than a podcast, and there’s no host. Instead we hope they better emulate the conversations we’ve been having as friends for close to twenty years now. Our goal is to produce something compelling for viewers, but we’re honestly also just excited about having a record of these Star Wars arguments and discussions that have defined our friendships for so long.

So, more shows are on the way and if you enjoy this first one, we’d love it if you’d leave a comment or drop us a line through Twitter or email. We have nearly endless enthusiasm for discussing these topics and we know there won’t be any shortage of content to talk about in the coming years, so we hope you’ll join us as we move forward with this project.