This Force Friday was ridic; so much good stuff. This is my haul from just two stores :-O

END_OF_DOCUMENT_TOKEN_TO_BE_REPLACED 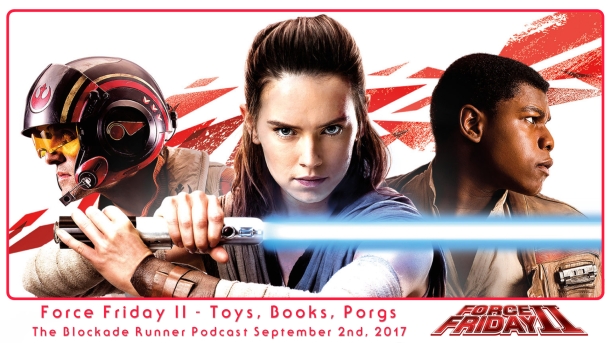 Ryan and John discuss a bounty of Star Wars toys, books, porgs, and more on Saturday, August 2nd (otherwise forever known as the day following Force Friday II!). Join us as we breakdown our pre-Force Friday II expectations, share a bit of footage from the line at our local Toys ‘R Us (video version only), recount our favorite purchases, and even take a quick look at a few interesting pages from some Journey to the Last Jedi books!

So excited to finally post the inaugural episode of The Blockade Runner podcast! Expect monthly episodes along with occasional bonus shows. In fact, it’s a safe bet that our first bonus episode will launch next week alongside the strongly-rumored trailer for The Force Awakens.

Welcome to The Blockade Runner, a monthly podcast about all things Star Wars produced and hosted by a core crew of longtime fans and friends. On our first episode we discuss some of our personal history with Star Wars, the new novel Lost Stars, some of our favorite under-publicized TFA merchandise, and more.