This one is all about breaking down every moment of the fantastic new Obi-Wan Kenobi trailer. We talk the show’s cinematic look, Owen’s sick burn, legacy character cameos, and theorize about the most intriguing moments.

Two new Rogue One “international” trailers dropped over the past few days, and though they’re largely the same and also very similar to the final U.S. trailer, there are some super-cool new shots and fun moments in both. I screen-grabbed my favorites and add some commentary below!

# 1: X-Wings Diving Toward a Satellite (Or Something)

We’ve only seen a few brief shots of Rogue One’s space battle(s?), but the footage we’ve seen has been beautiful! I suppose we’ve seen space battles take place a few miles up from a Star Wars planet before in the Battle of Coruscant, but something about the images of X-Wings battling above a blue planet feels super fresh!

Jyn’s mother, Lyra Erso, places a crystal attached to a necklace around her daughter’s neck  early in the first of the two new international trailers, telling Jyn to “trust the Force” as she does so. While I’m not expecting the Erso’s or many other Rogue One characters to be particularly Force-sensitive, I love seeing more ties to the Force being threaded through the film and its characters. If the rebels of Rogue One view the Force as something powerful but unknowable, that’ll only add to the mystic of the mythology surrounding it. Hope and faith seem to be major themes for the movie, and a rebel crew that revere the Force and put their faith into even though they don’t have the ability to master it sounds perfect to me!

Shots of the Death Star looming large over planets in a way it never did in the original trilogy have been part of Rogue One‘s marketing from the beginning, but this shot of the space station blocking out the son and sending a focused blast straight down at what I assume to be Jedha’s surface is the most direct example we’ve had of seeing it in action yet. I think we’ve been seeing the damage from this blast in all the previous trailers, but seeing it in action to this degree is all new. I’m personally hoping this is an indicator that the Death Star, while operational to a degree, won’t be fully-functional. The test on Alderaan in A New Hope needs to be the first time that technological terror wields its full power, but devastating attacks like this will do nicely in the meantime.

Let’s be real: Chirrut and Baze are going to be major highlights in Rogue One, and every glimpse of them we’ve seen in Rogue One‘s footage so far has been fantastic. Donnie Yen’s “you almost shot me” in response to Baze’s helping him finish off a crew of stormtroopers is hilarious, yet understated in a very Ewan McGregor’s Obi-Wan Kenobi sort of way. If you’re worried Rogue One may be missing some of Star Wars’s customary heart and soul, look no further than these two characters.

Speaking of Baze, I believe we’ve heard that his character has a very big gun, and seeing it in action single-handedly dealing out massive damage to this massive AT-ACT just plain rules.

U-wings are cool, u-wings in battle are really cool, but u-wings in hyperspace are an altogether different kind of cool. It may be the editing, pacing, and music of the trailer as much as the actual images of this ship blasting through hyperspace that are so exciting, but I love how this moment seems to offer another taste of how visually appealing Rogue One is set to be.

#7: Another Shot of Vader

We’ve only caught a few glimpses of The Dark Lord of the Sith in Rogue One‘s trailers, and honestly that’s probably for the best. Word from Lucasfilm itself is that Vader’s screen time in the film is minor, so it’d be a bit disingenuous to show him off too much in the marketing. That being said, even these brief glimpses are driving fans wild with excitement, and this shot is no different. I’m not sure what he’s up to here (is he frustrated? gesturing to use the Force for nefarious means?), but his body language is classic Vader and leads me to believe that the actor(s) suiting up for Rogue One is going to bring Vader back to the silver screen in an authentic way. 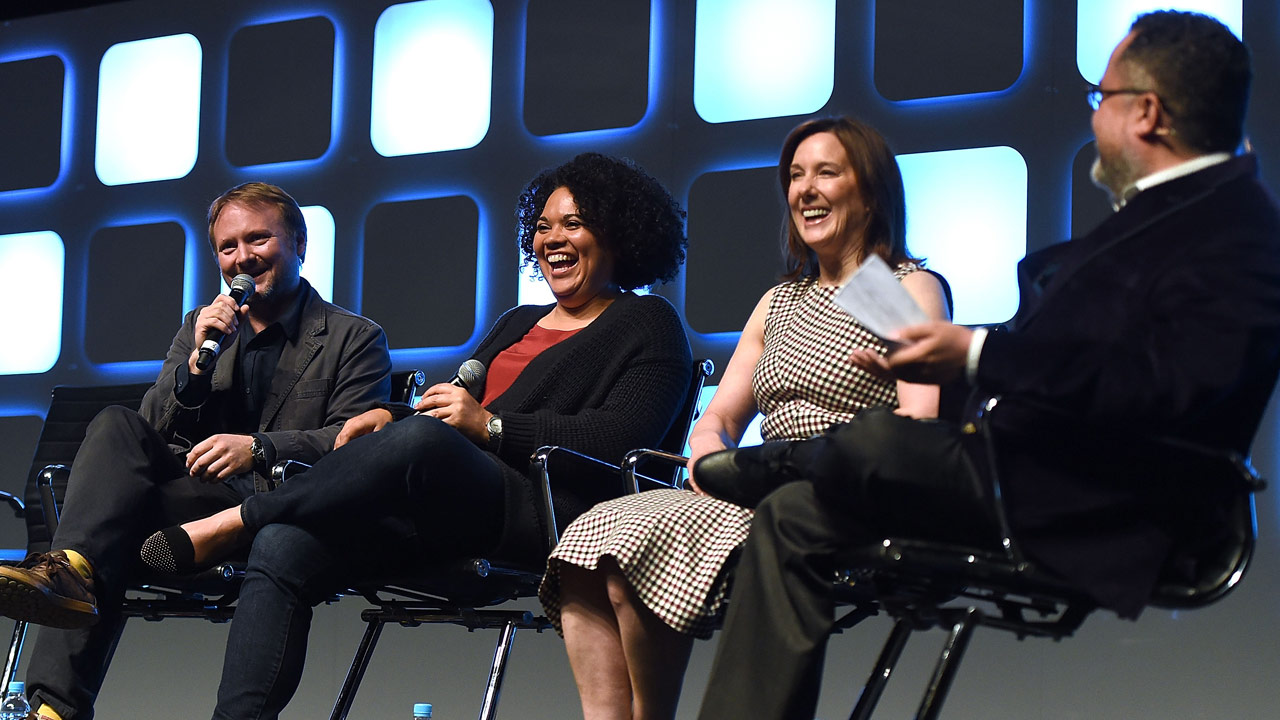 The final Force Awakens trailer is here and Ryan and John got together to discuss it just an hour or so after it was released. We pick the trailer apart shot by shot as we process our excitement about this incredible new trailer and also briefly share our ticket pre-sales experiences.

This morning I found myself watching the first two Force Awakens trailers again with my youngest son. I wanted to watch them again while they were still the primary sources of footage for the movie and it occurred to me that the period of time from the release of that first trailer last November to the final moments before tomorrow’s (presumably final) trailer drops is a significant era in Star Wars history.

It’s probably a bit melodramatic to look at it this way, but I do believe we’re entering the final push toward The Force Awakens and I enjoyed taking a few moments to look back at the past year. As I watched those two trailers a few more times, I started thinking about all of the other events and reveals that have taken place since: Comic-Con, May 4th, D23, and even Force Friday all took place during this period of time. Together, they’ve provided small bursts of images and information to keep us engaged and excited about The Force Awakens, but it feels as if tomorrow signals a considerably more significant lifting of the veil of secrecy around TFA.

Then again, the poster itself is very much in line with standard operating procedures so far; it’s conservative in how much new information it reveals (although upon close inspection there is one as-yet-seen character and what seems to a huge reveal in the upper right corner) and it makes use of concepts and characters we’ve become familiar with already. If the trailer follows a similar path, I won’t be surprised and I won’t be disappointed. But I can’t help but feel that the film’s story will become much more clear after viewing tomorrow’s trailer in a way that Lucasfilm was never ready to provide until now.

And if the trailer does provide a more detailed look at The Force Awakens’ story, for me it will mark the beginning of a new era in the lead up to the film – one that I expected to begin with Force Friday. I’m ready for that, but running through those first two trailers a few more times this morning, I couldn’t help but feel a tiny bit of sadness about this past year’s era of anticipation coming to an end. I want the answer to the questions I’ve been asking myself for the past 11 months (and really much longer). I desperately want to see more footage from TFA and I’ve even found myself frustrated with how long Lucasfilm has held out. But, asking those questions and waiting with the most excited anticipation for new footage has been the most fun I’ve had with Star Wars since 2005 or earlier. I have high hopes that the satisfaction and joy I’ll experience with the release of The Force Awakens itself will far exceed the fun I’ve had waiting for the movie, but I think I’ll always remember the wait for this one as a uniquely special time in Star Wars fandom.

Lucasfilm and Disney released a final trailer for season two of Star Wars Rebels yesterday at New York Comic Con, and as has now become standard with the show, it left me with major goosebumps.

The early portion of the trailer focuses on Ezra’s search for his parents and the importance of his newfound family, while the second half of the trailer emphasizes the role returning characters Ahsoka and Rex will play in season two. I’m undoubtedly looking forward to the inevitable showdown between Ahsoka and Vader, and Kanan’s discomfort at working with clones and being part of a larger group will surely be compelling as well. But most of all I’m excited about spending more time with the core crew of the Ghost and continuing to see their individual stories unfold alongside their deepening family dynamic.

To be honest, at times I’ve been slightly concerned that with twice as many episodes, it may be difficult for the producers of Rebels to maintain the show’s focus on the Ghost crew and the simple but incredibly powerful story of that unit as a makeshift family that it so tightly told in season one. But the opening moments of this trailer reassured me that the themes and characters that were so moving and exciting in season one are still a major focus here even if a host of new characters and membership in a larger rebellion will also be emphasized this time around. So far Rebels has been an incredible surprise in terms of its emotional impact on me and its importance to the larger Star Wars story. It’s characters have quickly grown to be some of my favorite in the Star Wars galaxy and I’m so invested in seeing their core story furthered this season most of all. Today’s trailer indicates season two will deliver in those terms while also bringing major showdowns, epic action, and the joyful tone it so successfully emulated from A New Hope as well. I can’t wait.