The Purgill featured in “The Call” are creatively bold, both in how they live in outer space and due to the implications surrounding them and hyperspace travel. Most of the discussion surrounding “The Call” centers (and rightly so) on the Purgill, but I like to find less-noticed moments to focus on for these Rebels Screenshot Spotlight posts. The image below (from the starwars.com episode guide for “The Call”) is an example of a shot that speaks volumes about the design of Rebels even if it may have gone largely unnoticed. 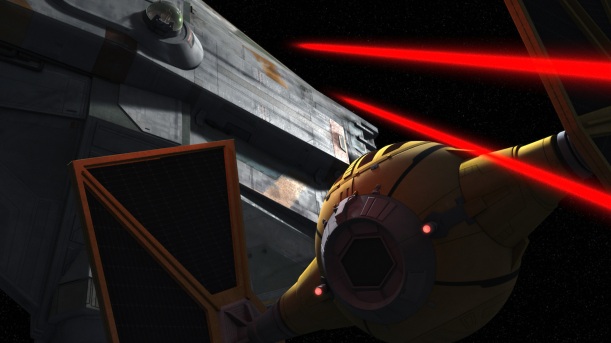 My favorite aspect of this shot is the way it is able to capture the look of A New Hope while simultaneously adapting that aesthetic to Rebels‘s own style. The appearance of the yellow Mining Guild TIE is an immediate call-back to the original trilogy era that also pushes the classic design into a new direction. This shot also demonstrates the show’s ability to capture a cinematic look while remaining distinctly cartoony. The lighting, as always, is stellar and the contrast between the brightly-lit portions of The Ghost and those cast in shadow provide the weight and realism that help the image dance the line between realism and stylized animation.